First project on how to make a logo guide for a fake company. This project was following a process of creating a Logo that follows a step by step guide on how to use the Logo properly.

Second project creating a snowboard design from idea to completion. In this case from hand drawing to creating on to a computer and producing a product from it.

Photoshop repair Assignment on the left side is the original photo token and on the right is the repair made after photo was repair. This was taken before I was born but from what my parents told me, these are my Grand parents when their were still young.

Also created a “castle on a window” as a collate project using photoshop.

Created a Invitation through InDesign as a the first project on learning Adobe Indesign. Then worked on creating a cover blanket using Indesign. From Indesign on the computer to the printed a product of the design to wrap around on the original book.

Next is my Resume 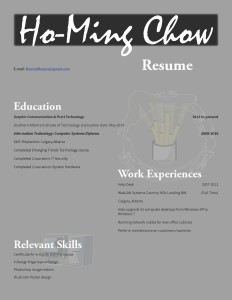 Welcome to the illustrator gallery enjoy.

On Left where the caption is called Transparency project is where I reproduced a character from a show that I was interested in that was a challenged since I had to make each pieces have a opacity and the rest using a clipping mask on its shoulders.

On right where the captions is Gradient Mesh. Where I reproduced a character from a game that was playing when I was young. The challenging part was how I wasn’t able to produced the “scarf” exactly as the the character is since colouring was very mixed.

The rest are a project of designing a snowboard for class.